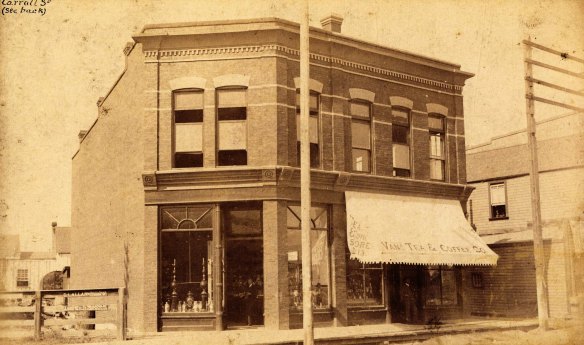 It’s not fancy, but this is one of my favourite extant heritage buildings in Vancouver, and now it is in danger of coming down due to a demolition next door by developer Millennium that shook the building and cracked the walls. (Millennium is the developer the City bailed out over the Olympic Village fiasco).

Located on Carrall Street next to Pigeon Park, this building went up in 1889 and first housed the Vancouver Drug Co. and the Vancouver Tea & Coffee Co., managed by Won Alexander Cumyow. 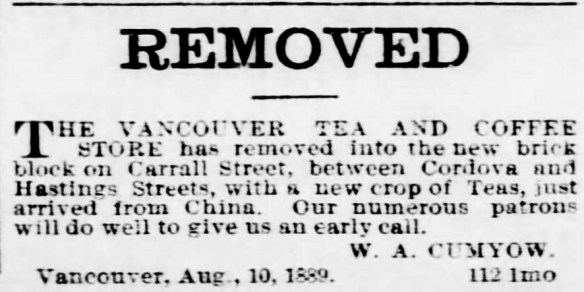 Cumyow was the first Chinese person born in Canada (in 1861), and was an important leader in early Chinatown. He was fluent in both Chinese and British cultures and studied law, even though racist laws meant he couldn’t become a lawyer. He spent many years working as a court interpreter, and was involved in local and international issues, such as leading the local faction advocating political reform in China (the revolutionists under Sun Yat Sen won that contest in 1911). Cumyow is the only Chinese person to have voted both before and after Chinese disenfranchisement. 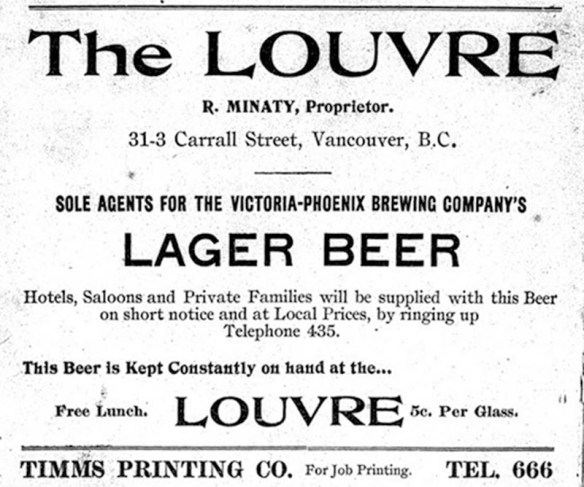 Ad for the Louvre Saloon from the Vancouver City Directory 1899-1900, via VPL.

Vancouver Tea & Coffee Co. didn’t survive the year and was replaced by a succession of businesses, including the Brown Jug Saloon in 1896 that was renamed the Louvre Saloon in 1897. 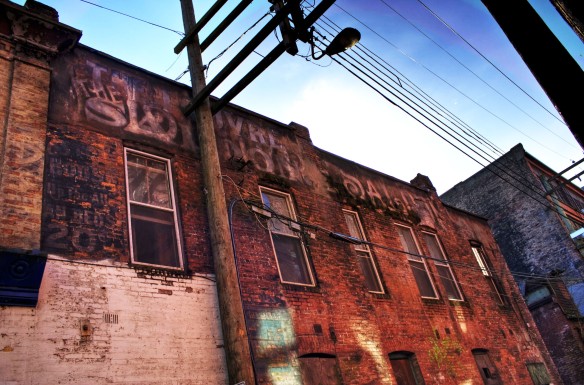 You can still see the Louvre ghost sign, probably the oldest one in Vancouver, in the alley on the north side of the building. On the lower left, the sign says “Boston House/up the alley/clean beds 20c.” Other ghost sign fragments on this wall say “& Candles” and “shing,” and “Ricketts Signs,” signifying that at least a portion was painted by Bond & Ricketts, a well-known local sign company that evolved into Jimmy Pattison’s outdoor advertising empire. The word “Saloon” on the wall indicates that this portion was painted sometime between 1897 and 1906 when the Louvre became a hotel once saloons were outlawed. 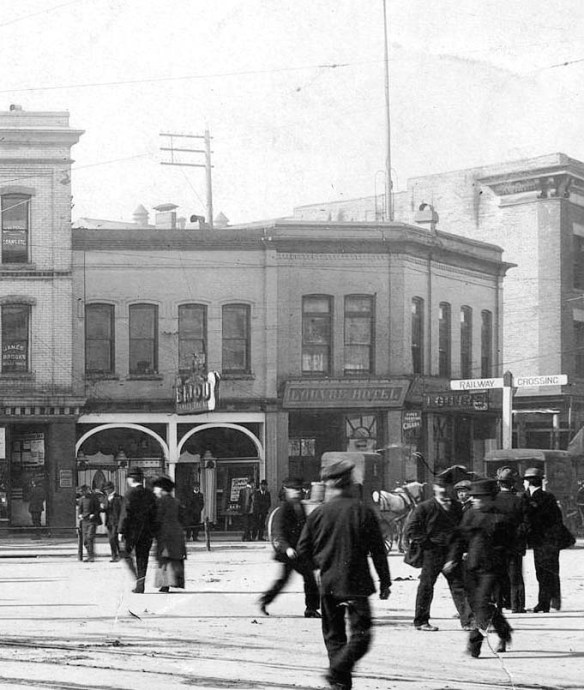 The Louvre Hotel and Bijou Theatre in 1910. The Merchants Bank building replaced the one on the left in what’s now Pigeon Park at Carrall and Hastings. City of Vancouver Archives #Str P416 (cropped)

In 1908, the Bijou Theatre opened next door to the Louvre, and was one of the first purpose-built moving picture houses in the city. The theatre was popular enough that in 1913 it was expanded by lopping off the south section of the Louvre. 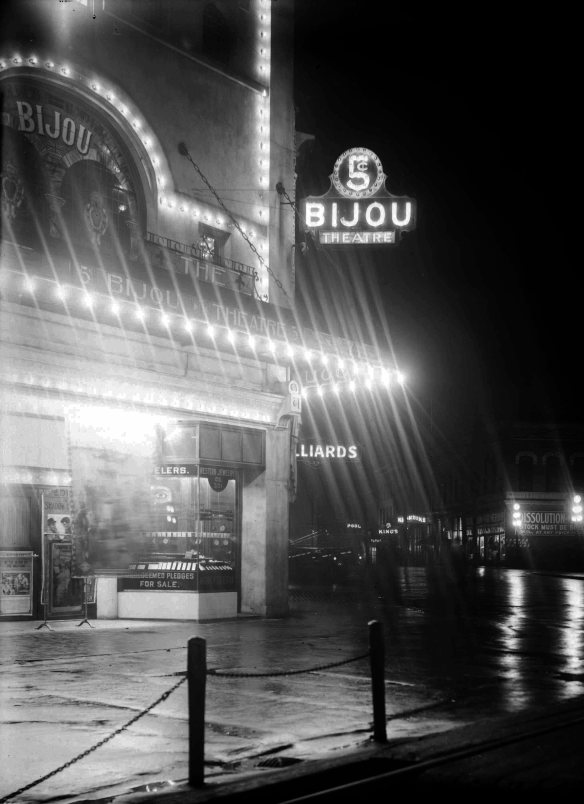 Bijou Theatre in 1913, after an expansion that took out part of the Louvre Hotel building. City of Vancouver Archives #LGN 995 (cropped)

The city license inspector tried to refuse granting a business licence to WP Nichols for the Bijou in 1917 on the grounds that he was an Austrian and therefore an enemy alien. The theatre survived that hurdle, but not the one that came the following year. To mitigate the Spanish Flu epidemic that was ravaging Vancouver in 1918, large gatherings were temporarily banned, including theatres. The Bijou didn’t survive the closure and the Merchants Bank (located next door in Pigeon Park) took it over. 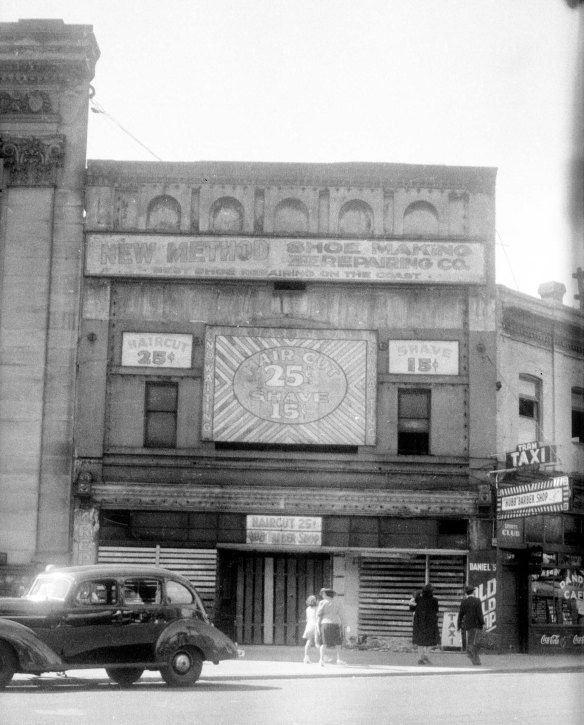 Various businesses, including a barber shop, shoemaker, café, and shooting gallery, operated in the theatre space until it was wholly or partially demolished around 1940. A nondescript one-story building then occupied the space between the Louvre and the Merchants Bank. This is what was demolished last week that damaged the Louvre building, and led the City to order it vacated as unsafe. According to theatre historian Tom Carter, the building that was demolished may well have been part of the old Bijou Theatre.

The Gospel Mission, or “Pigeon Mission,” moved into the Louvre building in 1941, listed as the Full Gospel Lighthouse in the city directory. Wings Café opened decades ago and was one of the last truly affordable greasy spoon diners in town. In 2003, a maverick safe fixing site for intravenous drug users operated next to Wings as part of the campaign that paved the way for InSite, North America’s first legally sanctioned injection site. In more recent years, the Gospel Mission has operated the “Lord’s Rain” in this space where people can take showers.

In her book on the 1886 fire that razed Vancouver, Lisa Anne Smith tells us that a 2007 renovation in the earthen-floor basement uncovered a layer of black carbon and ash dating from the fire. 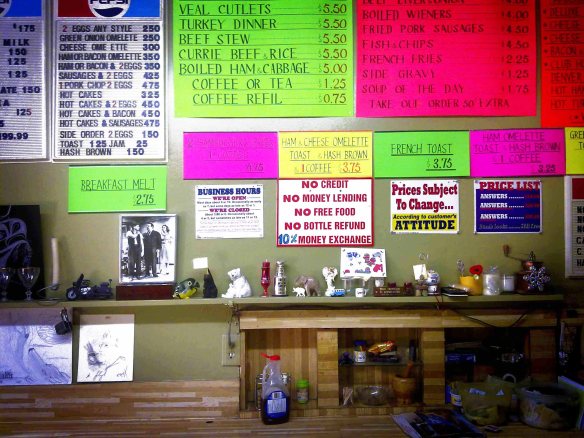 View from the lunch counter at Wings Cafe, 2011.

UPDATE (November 13th): The building has been propped up and the City has allowed Gospel Mission back into the building. They have an engineer scheduled to come assess the damage that Millennium needs to repair.