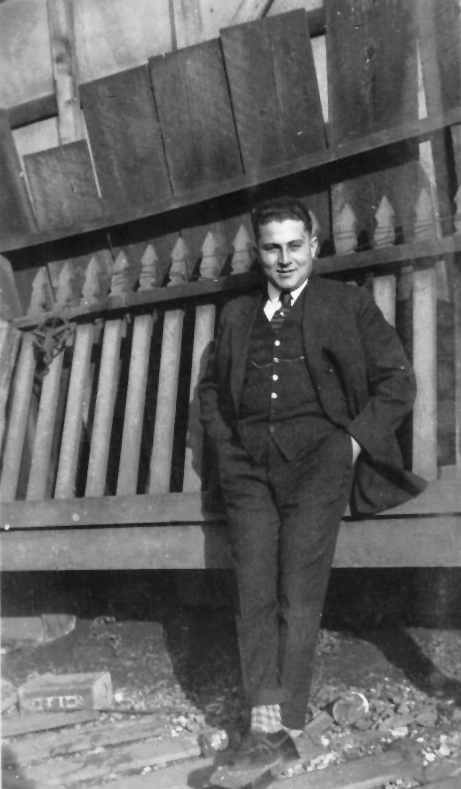 Giuseppe Fiorenza, better known as Joe Celona, came to Canada from Italy via New York City in 1913, and landed in Vancouver six years later. From 1919 to 1921, he lived and ran a disorderly house at 272 Union, and operated a store on the ground floor. This was where he was first “pinched” by the police in 1923. He sold this building in 1928, but by then owned several other East End properties that operated as bawdy houses, including 204 and 244 East Hastings and 210 Keefer Street. Next door at 600 Main Street, Celona ran his legitimate business, a cigar store. By the 1930s, he was living at 4973 Angus Drive in upscale Shaughnessy.

One of Celona’s regular customers at the cigar store was Mayor LD Taylor. The extent of their relationship may never be known for sure, but allegations of corruption dogged Taylor for much of his time in office. Mayor Taylor argued that police energy and resources should be focused on serious crimes, not the vice crime that pre-occupied moral reformers. He didn’t believe it was realistic or desirable to try and run a “Sunday School town,” especially in a seaport like Vancouver. To Taylor’s critics, he was soft on crime and allowed commercialized vice to flourish in Vancouver, which probably meant he was being paid off. 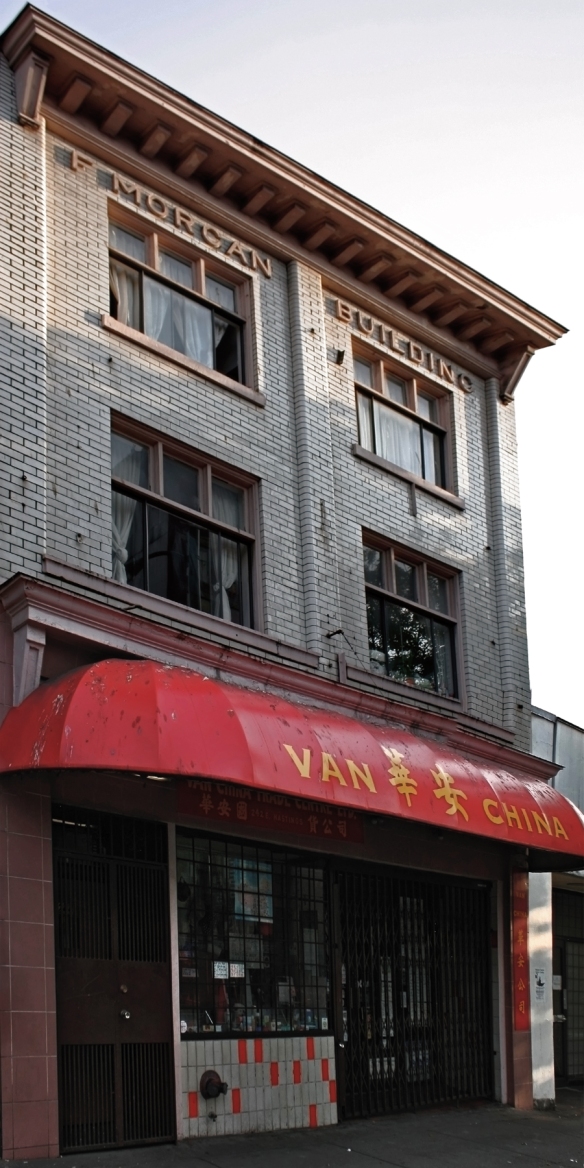 The F. Morgan Building at 244 East Hastings was one of Joe Celona's disorderly houses in the 1920s. Others were on Union near Hogan's Alley, and at Keefer and Main, where the HSBC bank is today.

The issue of corruption was aired in 1928 in an exhaustive police inquiry conducted by RS Lennie. Countless criminals, police, and politicians testified at the inquiry, but Lennie found nothing that conclusively proved Taylor’s City Hall or the police department had been corrupted by the likes of Joe Celona, though Taylor was a regular customer at Celona’s cigar store. What the inquiry did accomplish was to help ensure LD Taylor wouldn’t be re-elected in the next civic election; undermine public confidence in the police; and firmly plant the anti-vice and anti-Celona bug in the mind of the inquiry’s lead attorney, Gerry McGeer.

LD Taylor was out of office for one term, but managed to get re-elected as the city’s mayor the following year. Taylor won more mayoral elections than anyone before or since, in part because the right-of-centre vote was typically split at election time. So in 1934, Vancouver’s business elite came together and formulated a plan to get LD Taylor out of office. The crux of their scheme was to unite the anti-Taylor vote behind a single candidate and they recruited Gerry McGeer as their man. Picking up where he left off in the Lennie inquiry, McGeer ran an aggressive “war on crime” campaign and targeted Joe Celona specifically. “We’re going to Barcelona,” was one of his favourite campaign quips. McGeer rolled into City Hall with a huge landslide.

The Maple Hotel (now the Washington) was a disorderly house operated by Joe Celona in the 1930s.

Chief Constable John Cameron was another target in the war on crime. Cameron was charged with conspiring with Celona “to effect a public mischief by perverting the course of justice.” Colonel W. W. Foster had replaced Cameron as chief constable and led the investigation, which included the Vancouver Police Department’s first use of a wiretap. From their listening post set up in the Carter-Cotton Building, detectives monitored Joe Celona’s telephone and heard conversations between Celona and police officers. Colonel Foster claimed they were advising Celona on how he could avoid conviction, but the sound quality of the recording was so bad that it was excluded as evidence.

The only other evidence against John Cameron was that he partied with Joe Celona on several occasions, at Cameron’s ranch, at Celona’s house, and on the police boat on a cruise in Howe Sound. The police detectives who testified all agreed that it was necessary to occasionally mix with criminals to gather information, and in lieu of any evidence of an agreement or monetary gain, the case of a conspiracy between Celona and the chief fell apart, and Cameron was acquitted.

Celona wasn’t so lucky. He was charged with procuring girls for prostitution and running a disorderly house at the Maple Hotel on Hastings Street. What made the case especially repugnant to prosecutor Dugald Donaghy was that it was Chinese men frequenting the Maple. “There are no words in the English language to describe the abhorrence of [white girls] being procured exclusively for the yellow men from China,” Donaghy told the court. “That these girls should be submitted to crawling yellow beasts of the type frequenting such dives.”

The top floor of 373 East Hastings was Joe Celona's bootlegging joint in the 1950s.

Celona was sentenced to 22 years in prison, but an appeal reduced it to 11 years. With good behaviour, he was paroled and back on the streets in five, but his freedom didn’t last long. A public outcry and a campaign led by Mayor Lyle Telford ended with Celona being re-arrested and returned to the BC Penitentiary in New Westminster to serve the remainder of his sentence. Some people suspected Celona’s political connections got him out early, even though there was nothing unusual about his case under the ticket-of-leave system in place at the time. One factor that helped get Celona back in prison – besides his nefarious reputation – was that he was Italian and it was 1940. Some felt he should have been deported to fascist Italy.

When Celona got out the second time in 1943, he turned his attention to bootlegging and set up shop on the second floor of 373 East Hastings. He had run-ins with the law and paid a couple hefty fines, but managed to stay out of prison. 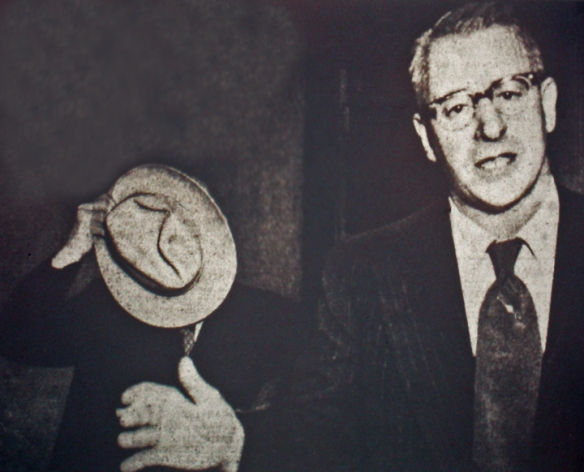 After this was taken, Joe Celona (left) attacked the photographer and called him a dirty rat. His lawyer, Angelo Branca (right), tried to break the camera. Vancouver Sun, 21 January 1956.

Celona found himself back in the public spotlight during the “Mulligan Affair.” Chief Constable Walter Mulligan had established a police pay-off system for local organized gangsters. The story was broke in 1955 by a Toronto-based tabloid called Flash, and RH Tupper headed up the inquiry. Celona was subpoenaed after police witnesses testified that he seemed to have intimate knowledge of policing affairs, such as who was being transferred and when. Detective Grant said he first learned that he would be moved from the Dry Squad to Morality in a conversation with Celona on the corner of Hastings and Gore. Celona denied this, and said he had never been shaken down by the police or paid them off.

The 1955 inquiry was the biggest Canadian news story of that year, and the press were all over it. Despite being a household name in Vancouver, Celona had so far avoided having his picture in the paper, and he wanted to keep it that way. When a photographer from the Sun snapped his photo, he covered his face with his hat. As soon as it was taken, Celona’s lawyer, Angelo Branca, tried to break the camera and Celona hit the photographer in the head. Celona became less camera shy after that incident.

After the incident with the Vancouver Sun photographer, Joe Celona became less camera-shy. These were all taken during the 1955 Tupper Inquiry into police corruption.

Celona eventually retired from his life of crime, saying “there’s no dough left in bootlegging; all the bawdy houses are closed down and now they stop a man from taking a few honest bets.” His death at St. Paul’s Hospital on 4 March 1958 marked the end of an era.